Under the direction of Dr. Jeffrey Glover, the field school provides students with a hands-on introduction to basic archaeological field techniques. These include excavation, survey, artifact analysis, flotation sampling, and GIS. Students work in conjunction with the Fernbank Museum of Natural History on their continuing excavations in South Georgia. This project involves work at two sites, one in Telfair County and one in Calhoun County. These sites date to the Lamar period (late Mississippian – A.D. 1350 – 1600) and either have evidence of, or potential for, early Spanish contact.

New archaeological findings at these two sites address the topic of European expansion into the New World by promising to bring long-sought clarity to the story of Hernando de Soto’s epic trek through this portion of the Southeast in the spring of A.D. 1540. Recent investigations by the Fernbank Museum have yielded evidence of early sixteenth-century Spanish exploration where previously there existed an uncomfortable vacuum of tangible traces. The work also provides new information about the Native communities that hosted the exploring parties. 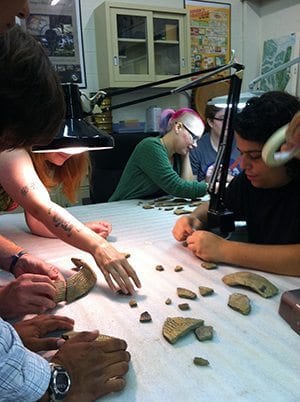 Prior to Fernbank’s recovery (with assistance from GSU students) of a robust assemblage of early sixteenth-century European artifacts at the Glass site (9TF145), there existed no compelling archaeological record of De Soto’s passage across the vast stretch between today’s Tallahassee, Florida and the Appalachian Mountains of North Carolina. Excavations since 2006 have produced unequivocal evidence of direct Native-Spanish contact before A.D. 1550 that includes four types of glass beads, three iron tools, a decorative brass piece, a silver pendant, and lead shot. The artifacts were recovered within a 14 x 20 meter excavation area, often in undisturbed context, that coincides with the location of a large Lamar-Period Native structure believed to be the community’s “council house.” 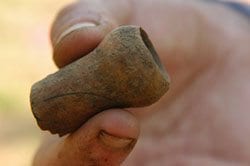 In 2007-2008 a different Fernbank investigation in southwestern Georgia documented a previously unknown late prehistoric community with at least 20 low, artificial mounds (Deer Run Site, Calhoun County). Limited testing confirmed a primary occupation during the fifteenth and sixteenth centuries. This location in the Chickasawhatchee Creek drainage coincides with perhaps the least-contested leg of De Soto’s path following abandonment of his winter encampment in March A.D. 1540. There is reason to believe the site represents the principal community within the Native province of Capachequi where De Soto’s chroniclers describe a brief skirmish and remark on a changed style of domestic architecture. Limited work on the site has yet to recover European artifacts but a radiocarbon date from the floor deposit of a semi-subterranean structure brackets the year A.D. 1540.

Contact Dr. Glover for more information on the program.

*Cost of the program varies but is less than $500/person. Space is limited.

The Department of Anthropology

Find Us on the Map

Send this to a friend